Move over Disney World… Budweiser is now officially King. It has always called itself the King of Beers, but now Budweiser has taken over the coveted interview mention by the winner at the end of the big game. Year after year, you would hear something like:

“Peyton Manning, now that you have won the Super Bowl, what are you going to do?”

“I’m going to Disney World,” would be the well-known reply.

No more. Peyton Manning said he was going to kiss his wife and kids and drink a lot of Budweiser.

Just in case not everyone heard it, Manning said it again at the announcement of the MVP award.

One would expect that the King of Beers had already agreed to bring a truck load of money to the Manning household – maybe two truckloads. After all, this was the most coveted product inclusion in America. Not true. 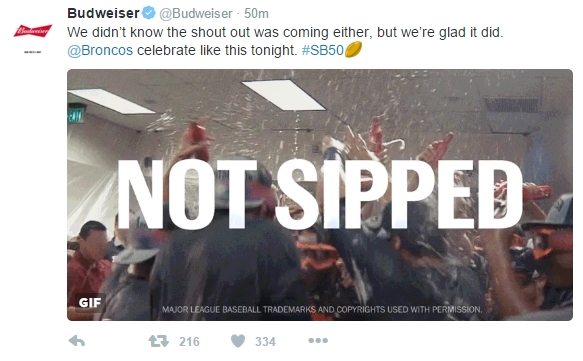 This is not the first time Manning has mentioned Budweiser either. He mentioned that his first priority was getting a Bud Light in his mouth after a victory over the Chargers last season.

So why would Manning give Budweiser, who plays football in one of the biggest beer capitols of the world, mention them? He plays in Denver, Colorado. Home to New Belgian Brewery, makers of Fat Tire. Remember Coors is from Golden, Colorado. There are 100+ breweries in Colorado and Bud is from St. Louis. Furthermore, Roger Goodell banned NFL players from endorsing any alcohol brands back in 2008.

Manning is rumored to be at least part owner of two Anhueser-Busch distributors. It may be a hint that he is retiring and doesn’t care about any NFL rules. More likely is that this was a protest of Manning for not being allowed to endorse alcohol while playing in the NFL, while the NFL can endorse Budweiser all they want. Also, since Budweiser and the NFL are advertising partners, it is more difficult for Manning to get in trouble with the NFL. Unlike if he had mentioned Heineken or Shiner Bock.

Bud Light is the official beer of the NFL. Budweiser has locked up advertising exclusivity for beer ads for the past 31 years. It has been reported that Anhueser-Busch spends approximately $200 Million annually with the NFL in rights and advertising. Goodell’s banning of player endorsements in 2008 was in response to alcohol related “incidents” and accidents. It could also be perceived as a cash grab. If the alcohol companies wish to advertise with football and they can’t work with the players, all of the advertising dollars flow to the league.

In the end, Peyton Manning’s mention of Budweiser was calculated and a shrewd marketing move by a player looking and working toward his next career after the NFL. Cheers Peyton Manning.