At Marketplace Consulting Group, we LOVE Presidential election marketing. They have some of the best marketers in the world teaming up behind a candidate for a very specific period of time. Winner takes all. The Presidential election has always been a marketing campaign, but it was the 2008 Obama campaign that took a deep dive into digital marketing. That is when campaign marketers took interesting to a whole new level.

With the 2016 Presidential election just over a year away, we are already seeing election marketing strategies, day-to-day tactics and lots of digital marketing. It has become apparent that a common theme with many of the candidate teams is to make their candidate seem approachable… a regular person. We saw the post-election success that Sarah Palin has had as a leader of the Tea Party with her “plain talk.” Whether it is George H.W. Bush hating broccoli, Bill Clinton playing sax on Letterman, or Obama filling out March Madness brackets, people like their modern candidates to be regular people. Many believe that to be a regular person, humor is an imperative.

We are glad to see so many of our 2016 Presidential candidates, on both sides of the aisle, have a little sense of humor… or at least their Webmasters do. However, the leaders of the PAC seem to have determined the 404 Page Not Found page on every website to be a good place for an Easter Egg of humor. Take a look at the some of the more humorous 404 error pages we have uncovered (alphabetical order – so no arguing about SEO placement). First the Democrats and then the Republicans… only because D comes before R:

Hillary Clinton – Shows off the young Clinton family (Bill, Hillary and Chelsea) at Disney on a family vacation. www.hillaryclinton.com/mcg

Martin O’Malley – This is the type of humor that can sink a campaign fast. It includes a photo of the candidate in uniform on a horse. We know you are thinking Putin, but it is really more Napoleon. Comparing yourself to a failed world conqueror may not be the best marketing strategy for the candidate. www.martinomalley.com/mcg 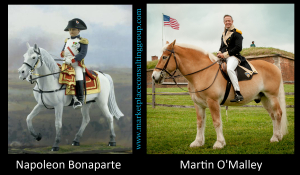 Chris Christie – At least Christie seems to laugh at himself here. He relives his most self-deprecating moment on a Jimmy Fallon video. www.chrischristie.com/mcg

Bobby Jindal – Why not blame Obama for everything, including getting to the wrong page on Jindal’s site? www.bobbyjindal.com/mcg

Scott Walker – Wondering here if this was a holdover from Talk Like a Pirate Day. www.scottwalker.com/mcg

Donald Trump – Unfortunately no humor on the 404 page. www.donaldjtrump.com/mcg

Rand Paul – Appealing to those paranoid that the government is watching them, also known as Rand Paul’s base. www.randpaul.com/mcg

Lindsey Graham – Unfortunately no humor, but now that Trump gave out his personal cell phone to America, there are a lot of busy signal jokes available for his 404 page. http://www.lindseygraham.com/mcg

Rick Perry – No humor on the 404 page. This Texan is trying to play a straight shooter after his 2012 Presidential debut. www.rickperry.org/mcg

John Kasich – No humor on the 404 page, but he just announced, so give his team time to get a sense of their candidate’s humor. www.johnkasich.com/mcg.

George Pataki – No humor and really no reason for it… Come on George! www.georgepataki.com/mcg

Rick Santorum – Very funny poke at Hillary. They obviously decided to focus on poking fun at the bigger candidate rather than himself or other primary competitors. www.ricksantorum.com/mcg

Ben Carson – No humor, but he offers the hashtag #BC2DC16. We suppose the head of digital marketing is more of a Tweeter. www.bencarson.com/mcg

Carly Fiorina – Shows a video of Hillary speaking and then Fiorina shutting off the TV as to dismiss her. Funny stuff, but then she follows it up with a serious pitch for herself. www.carlyforpresident.com/mcg

Marco Rubio – This candidate is known as an inspirational speaker. So how does he do as a pee-wee football coach? www.marcorubio.com/mcg

Ted Cruz – Simply redirects to his own homepage. Maybe later in the campaign, Cruz will gain more of a sense of humor. www.tedcruz.org/mcg

Whatever the humor is and wherever we can find it, the end goal is to make the candidate seem much more personal and approachable. With the notable exception of Martin O’Malley, we think most of these marketing teams are on the right track… with overwhelming caution and moderation.